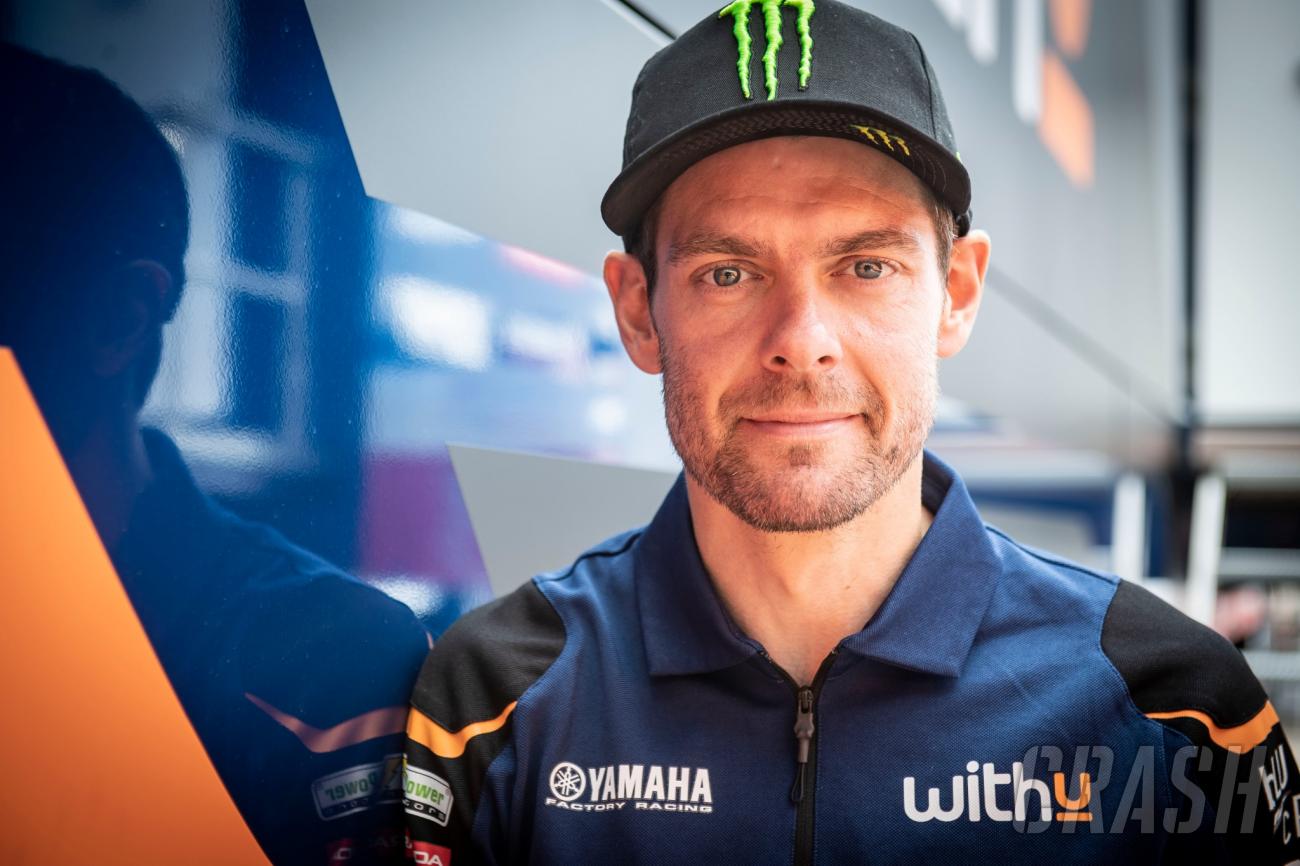 Signing as Yamaha’s official test rider after retiring at the end of 2020, Crutchlow made four starts in place of Franco Morbidelli (SRT) and Maverick Vinales (Monster) last season.

But his upcoming schedule will see the Englishman not only compete in the final six MotoGP races of the season, including four flyaway rounds, but also two tests during the weekends off!

“I called Dovi and told him he owes me a significant amount of money because I had to cancel a holiday that was right in the middle of this block of races!” grinned Crutchlow.

“I’ve got six races and two tests, both at Jerez, in eight weeks. But it is what it is. I think if you accept the circumstances and that you’re going to do it, you’re in a good frame of mind.”

In terms of getting back into race mode, Crutchlow, who took a best of 16th in his appearances last season, said: “I’ll give my 100%. Where my 100% is, I have no idea. What I am concerned about is, why are they going so fast?! There’s just no need!”

“Dovi was also the last of the breed of riders that were controlling all of a race. Now you can’t control anything. They’re just going flat out from the first corner to the end, which has never really been my style either! And they’re a lot faster than last year, lap time wise.”

Crutchlow: ‘What Fabio does is very special… The Marc Marquez effect’

Dovizioso, a triple title runner-up for Ducati, opted to retire after his home round after failing to break into the top ten on the Yamaha this season.

The Italian certainly wasn’t alone in struggling on the M1, his 21st place in the standings putting him between Franco Morbidelli (19th) and rookie Darryn Binder (23rd).

Yet, in a situation that mimics the gulf in performance often seen between Marc Marquez and the other Honda riders, Fabio Quartararo is leading the world championship.

Crutchlow, whose 2018 Termas de Rio Hondo victory remains the last win by a Honda rider other than Marc Marquez, said:

“I understand why [the other Yamahas] are struggling. I think [Yamaha] are in the Marc Marquez effect of him being the only one able to ride the Honda. I gave it a good go when I could. Or Dani [Pedrosa]. We were there at certain times.

“Yamaha are struggling with [getting] the rest of the riders as fast as Fabio. But I actually don’t think the other riders are doing a bad job. I think Fabio is just doing an unbelievable job.

“There’s no substitute for horsepower and these guys are having to override the bike to compensate for that.

“What Fabio does with the bike is very, very special, of how he can get the most out of it. Why I say it’s the Marc Marquez effect is because I know how he does it, I can see how he does it – even from watching on TV – but you can’t do it!

“And when you don’t go around the corner as slow as us, he doesn’t have to open the throttle as much. He doesn’t spin the rear tyre. It’s like a vicious circle.

“One of the main things we need to do is bring the other [Yamaha] riders closer to Fabio, as well as making Fabio faster of course… Obviously there’s only one more [rider] next year.”

Speaking shortly after, Morbidelli confirmed that his recent progress has come from closing the corner speed gap to Quartararo.

“Yeah exactly. Since I’ve started just to concentrate on gelling with the bike, I was able to make really good progress in maintaining decent braking but [still] carry good corner speed. Finally, the braking is similar to the other brands, but our strong point is corner speed or lines. I’m making small steps upwards,” said the Italian.

Crutchlow: ‘At the moment they can’t battle’

While the other Yamaha riders battle to replicate Quartararo’s corner speed, the young Frenchman has been calling for engine performance to take on the likes of Ducati on the straights.

Nothing can be introduced on the engine side this season, due to the homologation rules, but Quartararo was impressed with a prototype 2023 engine at the recent Misano test.

“We could see from the data and I knew immediately it was a lot better. So they’ve done a great job,” said Crutchlow, who has helped develop the engine.

“I think they’ve done a great step already and we’ll see what the next one is.”

Quartararo starts Aragon with a 30-point advantage over Ducati’s Francesco Bagnaia, who has won the last four races in a row.

“Fabio’s still leading the championship,” said Crutchlow. “Just because [Bagnaia’s] on a run… Once [Fabio] gets a result that he’s happy with, the confidence will just keep going.

“We know the problem is if he doesn’t qualify well, it’s difficult. And we’re going to a track that he doesn’t like as much, but who is to say he doesn’t have a positive weekend here?

“I think for the championship anything can happen… I can come back and everything!”

Crutchlow: ‘I’ll need a new shoulder at some point’

Although he’s retired from full-time competition and able to ride the Yamaha “in a perfect time bracket to test. Not 3 seconds too slow and not trying to break the lap record”, Crutchlow continues to carry injuries sustained during his career.

“Yeah, I’ve got a bad back still. I’ve had probably 10-20 MRI scans on it and it’s actually one muscle in the back, but something’s got to be causing it and nobody in the world at the moment can figure it out,” he said.

“But the worst is my shoulder. I’ve got to have, at some point, a new shoulder. Because there’s no cartilage. In 2014, the arthritis was grade 2 and now it’s grade 4, bone on bone.

“It just flares up or doesn’t flare up. It’s worse at the moment, I believe it’s the change of weather.

“But if I do decide to have a new shoulder, I won’t be riding a motorbike again. You’re fine to do [normal] stuff but not the stresses of this.

“2.5 years ago they told me ‘for as long as you can deal with the pain, it’s OK. [But] if you turn around and say you can’t deal with it anymore, we’ll put a new one in’.

“But that [pain threshold] could have happened then, or it could be in three years [from now].”

Binder: ‘Out with one legend and in with another!’

Crutchlow won the 2009 World Supersport title, three 2010 WorldSBK wins and his first six MotoGP podiums with Yamaha before a season at Ducati and then six years at Honda, where he won three races for LCR.

The 36-year-old will ride alongside RNF rookie Darryn Binder, who will continue on the A-spec machine.

“Out with one legend and in with another!” smiled Binder, when asked about Crutchlow taking over from Dovizioso as his team-mate.

“I’m excited to see what it’s like with him in the box and see where he picks up at. He’s done some testing but I don’t think it’s that easy to rock up [and race]. But maybe he’ll surprise us. That’d be cool.

“I’m hoping I can learn some things. Dovi always explained things really nicely and I’m expecting to learn from Cal as well.”