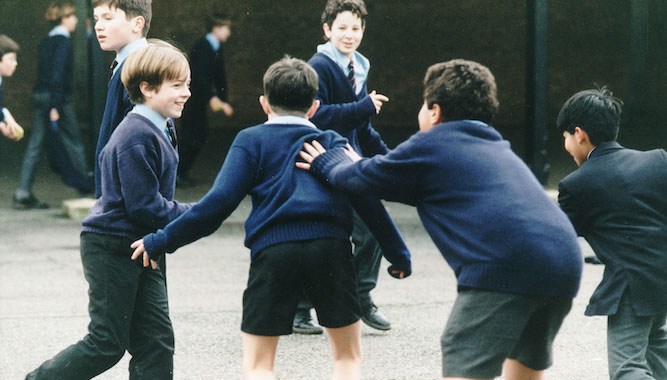 IN the good old days, kid’s games revolved almost entirely around ways to inflict bodily harm on each other. These were the most brutal:

King of the Hill

The most simple of games: one person stands at the top of a small hill and everyone else tries to push them off to become king in their place. Though the rules say pushing is the legitimate way to remove the king, a swift kick to the back of the knees or a sneaky elbow in the face does the job much better.

Lining up against 50 of your peers to run from one side of the playground to another while they try to bludgeon you into the tarmac could lead to any type of injury from severely grazed knees to a broken arm. Many schools have now banned it, which is probably what has made young people today a bunch of soft, whiny snowflakes.

One player assumes the foetal position on a trampoline and tries to remain in the shape of an egg. The others bounce them around ruthlessly until they crack and throw their arms out to stop them hitting their heads on the floor when they inevitably fly off. Basic, yet has a huge potential for terrible injury.

People think skipping is ‘for girls’ and therefore a dainty and delicate game, but they obviously haven’t jumped into the middle of two rapidly turning ropes manned by a pair of psychos hell bent on sending them to the school nurse to have a large piece of gravel painfully tweezered from their knee. And all while performing a confusing syncopated chant. Truly fiendish.

Being hit with a snowball is a bit of fun, until someone decides it will be a laugh to make one around a chunky stone and wang it right at your head. Cue blood on the beautiful white snow, concussion and a trip to casualty that will have you returning to school a hero on Monday.