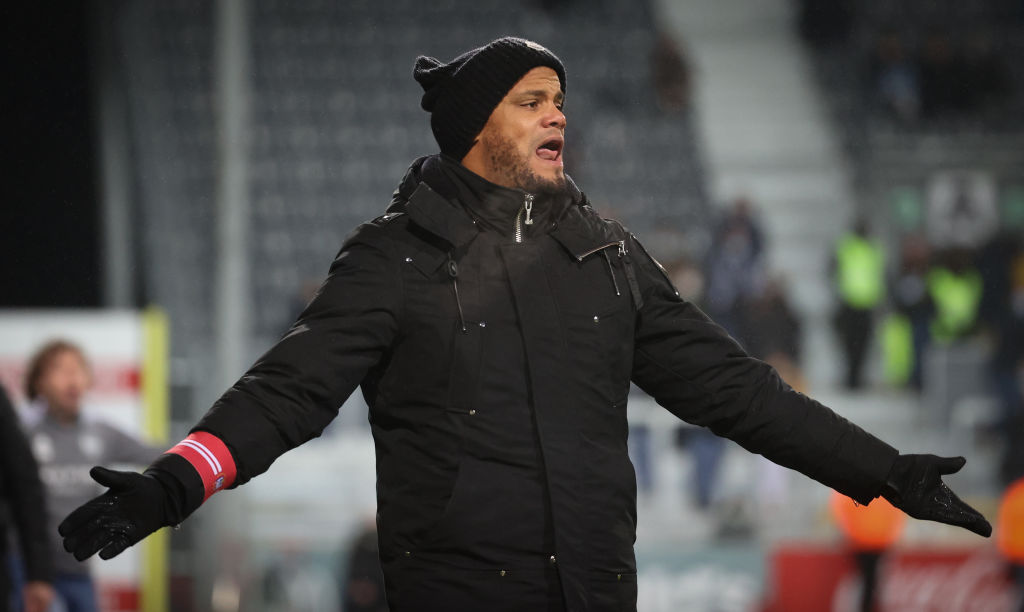 Incoming Burnley boss Vincent Kompany will reportedly use his Manchester City connections to make highly-rated centre-half Taylor Harwood-Bellis his first signing of a bold new era at Turf Moor, according to The Sun.

But who else can we expect to see donning claret-and-blue when the Championship campaign kicks off in August?

Fortunately for Burnley, Kompany has a contact book as thick as the Yellow Pages…

According to Het Niuewsblad, Kompany has identified a new centre-forward as one of his top targets at Turf Moor amid doubts over the future of ill-fated January signing Wout Weghorst. And the former Manchester City skipper is reportedly ‘convinced’ that 6ft 3ins Gueye would fit in perfectly at a club who carve out plenty of opportunities via crosses and set-pieces.

Burnley are already in talks with KV Oostende about Gueye and could pay a bargain £4 millon for a man who scored 12 league goals in 2021/22.

Maxwel Cornet’s £17.5 million release clause is unlikely to go ‘un-triggered’ for long, while Dwight McNeil will also have his fair share of admirers. What’s more, Aaron Lennon is out of contract, meaning the injury-prone Johan Berg Gudmundsson could be Burnley’s only senior option out wide sooner rather than later.

Belgium U21 international speed-machine Amuzu may come under consideration then, particularly with a £3.6 million clause in his deal. Amuzu contributed 15 goals and assists across 2021/22 but, according to his former Anderlecht coach, there is more to the winger’s game than mere statistics.

“He is a guy who has a lot of margin for progression. Amuzu creates a lot of danger and I don’t just look at his statistics, because he has created a lot of chances that were then not finished,” Kompany said of the one-time Rangers target last year.

After falling out of favour at parent club Bayern Munich, and after a difficult spell at Parma, Zirkzee and Kompany looked like a match made in footballing heaven in the Jupiler League.

“As a professional, he plays there weekly for the first time (in his career). He also clicked with the coach from day one.”

Zirkzee was keen on the idea of staying for another season under Kompany at Anderlecht. Do not be surprised, then, if the 21-year-old poacher ends up following in his boss’s footsteps, swapping Belgium for Burnley.

Skilful and highly technical despite his rangy 6ft 4ins frame, Zirkzee’s Bayern contract expires in 2023 and the man himself has already suggested that he has no interest in spending next season on the Allianz Arena bench.

Perhaps the most ambitious and intriguing name on this list, former Barcelona and Borussia Dortmund whizzkid Gomez finally started to deliver on his vast potential under Kompany at Lotto Park.

The swashbuckling left-back contributed a remarkable seven goals and 15 assists from a so-called defensive role and could either compete with or replace Charlie Taylor at Turf Moor, depending on whether or not Burnley’s number three stays or goes.

Gomez has Premier League admirers too. According to The Athletic, however, Everton are prioritising reinforcements in other positions while Leeds United also appear to be looking elsewhere.

Gomez won’t come cheap but a £17.5 million windfall following Cornet’s departure may free up enough funds to make a bid.

Mr Consistent Ashley Westwood will not return any time soon from a sickening ankle injury, while the doubts surrounding Josh Brownhill’s future opens the door for an all-action, deep-lying midfielder in the Cullen mould.

TEAMtalk reported a couple of weeks ago that Burnley have scouted the former West Ham youngster recently. And that was before Sean Dyche received his P45.

“He is never named the Man of the Match, but he is the most popular in the squad,” Kompany told DHNET.be.

“Those who admire him the most for his work are his team-mates. He has only one thing in mind – the team. If the team wins, it is because he did a lot of jobs that the others could not do.

“Against Genk, for example, he hit his head and they put a bandage on him. Because I know he is of Irish descent and tough as iron, I slapped him on his bandage and said with a laugh; ‘Are you okay? Come on, run then, and stop making excuses’.”

In other news, Chelsea stance on ‘fantastic’ player Van Bronckhorst wants at Rangers