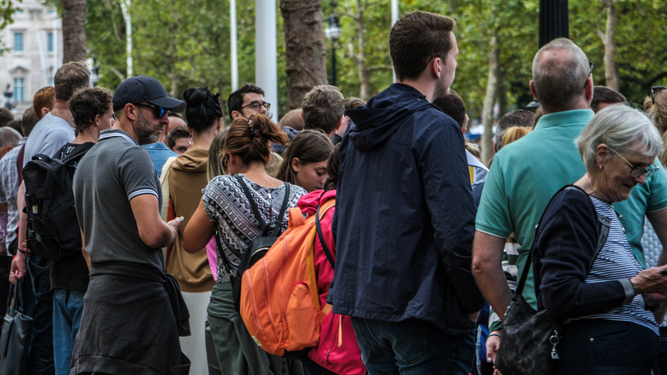 THE three-mile queue for the Queen’s lying-in-state is not as British as everyone says it is. Here’s why.

The origins of queuing are lost to the mists of time, meaning nobody knows who invented it. Even though everyone associates standing in an orderly line with Britain, the Chinese probably came up with the idea centuries before we got round to it. But just like everything in the British Museum, we stole it and claimed it as our own.

The queue for the lying-in-state is a masterpiece of planning. It has toilets, airport-style security and an accessibility route, all of which is about as un-British as it gets. A proper British queue would be a bloated, costly affair run by Tory donors which demonises asylum seekers. Any of its failings would of course be blamed on the Labour Party.

Britain is a greedy country currently in the grip of late-stage capitalism, meaning the existence of a free queue snaking its way through London is a bizarre anomaly. By rights it should charge people 20 quid every 100 metres, before being sold off to France who will make a massive profit out of it. Nothing could be more British than that.

Queuing is a popular British stereotype, along with drinking tea and having crooked teeth, but why? Other countries wait in line every day and have the decency not to get all possessive about it. Meanwhile the presence of the Queen gives the whole ceremony a faintly Germanic air. Our ‘queue nationalism’ is a hypocritical farce, which is admittedly very British.

Anyone who’s ever waited to get into a nightclub or football ground will tell you the British are not the most civil of queuers. A fight is always on the brink of breaking out, someone’s usually chanting Sweet Caroline, and there’s always some bastard trying to cut in. None of this is happening at the lying-in-state, but mainly because there’s loads of armed guards about.