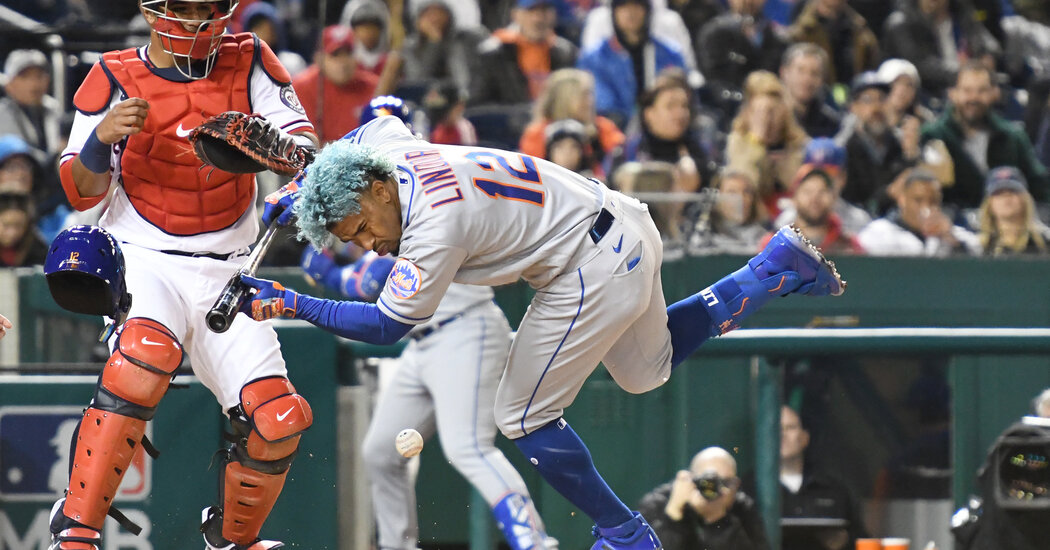 WASHINGTON — The highest paid player in Major League Baseball took the mound here on Friday night and the surroundings were certainly familiar. Max Scherzer won the 2019 World Series and two of his three Cy Young Awards during his six and half year with the Washington Nationals, which made it odd for many in attendance to see him pitching for a visiting division rival and being honored with a tribute video.

But the recent roles of the franchises have flipped. It is the Nationals who are rebuilding and the Mets who have spent a lot of money in the hopes of building a postseason contender, led by Scherzer, now 37.

On Friday, the Mets got the sort of experienced, stout performance they had envisioned when they gave Scherzer a three-year, $130 million contract over the winter. Despite recovering from a minor hamstring injury, despite 11 days in between facing batters, despite a few delays — including a benches-clearing incident in the fifth inning sparked by a pitch that hit teammate Francisco Lindor in the head — and despite a few mistakes on the mound, he guided the Mets to a 7-3 victory in their second game of the regular season.

“He was outstanding,” Mets Manager Buck Showalter said of Scherzer, who allowed three runs and struck out six over six innings. Scherzer, too, was pleased given what he was battling.

“You’ve got to protect your leg in this situation even though I felt like I was 100 percent and I could get into it,” he said. “But I just didn’t want to risk anything else. You might have an injury in one spot but something else will go on you if you’re going too hard.”

He added: “You can pitch around injuries and tonight was one of them.”

Scherzer’s start came with tensions already high between the teams, as some Mets were bothered by the hit-by-pitches the team sustained in the season opening win on Thursday. The scariest of those came when a pitch had smacked Mets first baseman Pete Alonso on the lip, with a worse outcome being averted thanks to the helmet flap covering part of his face. Watching from the dugout, Mets right fielder Starling Marte held up three fingers — to indicate the number of hit-by-pitches his teammates had received that game — and voiced his displeasure toward the Nationals dugout.

A day later, the tensions boiled over in the top of the fifth inning. After center fielder Brandon Nimmo tripled, Marte gave the Mets a 4-3 lead with a double that chased Nationals starting pitcher Josiah Gray from the game. Up came Lindor, who squared around to bunt on the second pitch of the at-bat against Nationals relief pitcher Steve Cishek.

But the ball sailed up and in, smacking the c-flap, as it is called, on Lindor’s helmet. It knocked the helmet off entirely and sent Lindor to the ground. The Mets dugout responded angrily, with third base coach Joey Cora and Showalter shouting at Cishek, who yelled back.

Both benches soon cleared and pitchers raced in from the bullpens. Players and coaches got in each others’ faces, some holding each other back and yelling. Juan Soto, a star outfielder for the Nationals, put his arm around Lindor, who had wandered toward the scrum.

“I’m proud to be a New York Met,” Lindor said later. “I got hit, am on the ground and I look up, and the whole entire team is out there.”

After players and coaches returned to their dugouts, the umpires ejected Cishek because they felt he had escalated the skirmish by not walking away from the scrum. They also tossed out Nationals third base coach Gary DiSarcina for escalating the situation.

Much like it had with Alonso, the c-flap saved Lindor from further injury. X-rays on his face were negative and he passed concussion tests, the Mets said. After the game, Lindor said he was lucky to have avoided a worse fate.

“One of my tooths might be cracked, but not bad,” he added, then alluding to his nickname Mr. Smile, “I can still smile.”

After the game, Lindor also revealed that Cishek had apologized for the pitch. He added, “They’re pitching up and in, and they’re missing their spots. I’m not going to get into whether it’s intentional or not. It’s a game.”

Said Showalter, “Scary, initially. Times like that, the fourth one, I don’t want to really hear about intent.”

The skirmish came on a day of several delays or interruptions: a 14-minute delay before the first pitch because of issues with the lights at Nationals Park, the benches-clearing incident, a rain delay in the ninth inning. Scherzer did not let any of it bother him.

He started the second game of the season, and not the opener, because of a leg injury that popped up in the final days of spring training. He was the obvious candidate to fill in for the original opening day starter, Mets ace Jacob deGrom, who suffered a shoulder injury in the final days of spring training that will likely sideline him for months.

But Scherzer — whose off-season contract set a M.L.B. record for the highest average annual salary ($43.3 million per year) — still needed a bit more time to recover. And the day before his Mets debut, Scherzer declared that he felt ready enough to start on Friday and could manage the leg.

Against the Nationals, Scherzer wasn’t at his sharpest but he did enough to recover from his miscues. With the Mets leading by 3-1 in the fourth inning, he coughed up a single to designated hitter Nelson Cruz. Then, facing first baseman Josh Bell, Scherzer threw a fastball down the middle of the plate and instantly knew he erred. Bell smashed it into the right-center field seats for a game-tying two-tun blast.

But the Mets bounced right back. Marte put the team ahead in the heated fifth inning and added a two-run single an inning later. Second baseman Jeff McNeil, who homered in the third inning, added a run-scoring single in the seventh — providing further breathing room for the Mets and Scherzer.

“Just a crazy wild experience,” said Scherzer of facing the Nationals. “It’s almost good that this was the first one. Get it out of the way and let’s just go on and keep marching forward. A lot of great memories here but the team is different.”