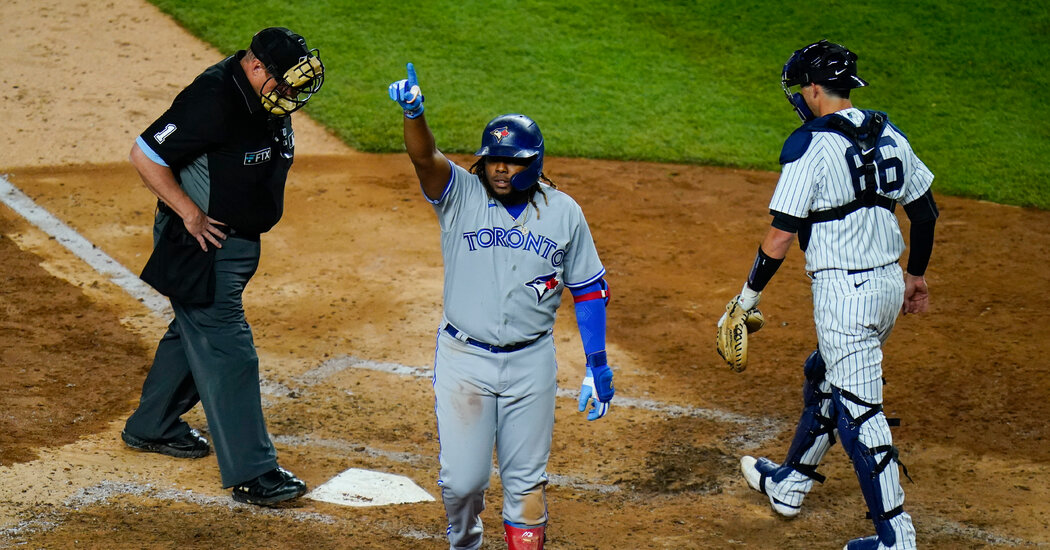 George Springer hit a tiebreaking single in the seventh, and Toronto held off the Yankees despite homers from Anthony Rizzo, Aaron Judge and Gleyber Torres — and a fly in the eighth by pinch-hitter Giancarlo Stanton that was caught on the warning track.

Guerrero had a big hand in that.

The runner-up for last year’s American League Most Valuable Player Award homered off Cole in the first inning, had his hand accidentally spiked on a play at first base in the second, then hammered a line-drive, two-run shot against Cole in the third to put Toronto up 3-0.

He doubled off Cole in the sixth — prompting the pitcher to make a show of tipping his cap to the 23-year-old — then launched a 443-foot leadoff homer against Jonathan Loaisiga in the eighth for a 5-3 lead.

It was the second three-homer game of Guerrero’s career, matching a career high set last April 27 against Washington. He was on deck when teammate Bo Bichette made the final out in the top of the ninth, leaving him without a shot at matching the big league record of four homers in a game.

Guerrero leads the majors with four homers in six games after topping the bigs with 48 last season.

Jordan Romano pitched the ninth for his fourth save of the season. He’s converted 27 straight chances.

Guerrero seemed like he’d have to leave in the second inning when his bare throwing hand was stepped on by Aaron Hicks. Guerrero had to reach across his body for Bichette’s throw and placed his right hand down behind the first base bag to balance. Hicks stomped on it running out an infield single.

The fourth-year big leaguer immediately began waving the hand around, then walked toward Toronto’s dugout as blood dripped onto his uniform and the turf. In a show of toughness sure to satisfy hockey-mad fans back in Toronto, Guerrero had a trainer tape up his wound and jogged back to first base a couple minutes later.

Mets Build a Lead and Then Hang On

PHILADELPHIA — Max Scherzer finally could pitch with all his strength now that his right hamstring wasn’t bothering him.

It took a bit for him to figure that out, but when he did, he looked back to his Cy Young self.

Scherzer settled in after working out of an early jam, Pete Alonso drove in five runs with a homer and two doubles and the Mets beat the Philadelphia Phillies, 9-6, on Wednesday. It took loading the bases in the first for Scherzer (2-0) to recalibrate how to pitch on his right leg again, then he struck out the next batter, induced a groundout and allowed one run and five hits with seven strikeouts in five innings.

“I just wasn’t completely executing every pitch where it needed to be,” Scherzer said. “Fortunately enough to be able to walk three in an inning to not have that spiral out of control and give up a bunch of runs in that situation. That really set a tone and allowed our offense to get going.”

Alonso and the rest of the Mets’ offense provided more than enough run support for the 37-year-old three-time Cy Young Award winner. Brandon Nimmo hit a solo home run off Aaron Nola in the third inning — the first Mets hit of the afternoon — before the middle of the order teed off in the fourth and fifth.

“We did an excellent job of pouring it on all day,” said Alonso, who was again the designated hitter instead of his preference to play first base. “We had excellent at-bats one through nine, and that’s what it takes to win these tough, divisional games.”

Alonso’s first R.B.I. double helped knock Nola out of the game. The right-hander also lost command in the fourth, walking a batter and hitting two more to load the bases and get the hook from manager Joe Girardi. Nola (1-1) allowed three earned runs on three hits in 3 ⅓ innings.

The Mets also knocked around the Phillies bullpen, which went five relievers deep after Nola’s short start and with an off day coming up. Alonso drilled a three-run homer run to right-center in the sixth to make it 8-1 and close Scherzer’s day after throwing 96 pitches.

“That was a big moment in the game that kind of put us ahead by a bunch, and thankfully that was enough,” Alonso said. “Philly has a great offense. They’re a great team. They started to come back there. But I feel like coming through like that for the team was huge.”

Webb (1-0), who emerged as the Giants’ ace last season, allowed one run. He retired 22 of the final 24 hitters he faced, striking out seven and walking none.

Through his first two starts, Webb has surrendered just two runs over 14 innings.

Padres lefty Sean Manaea (1-1) was also stingy, holding San Francisco to two runs over six innings of four-hit ball. But Williams’s two-run double in the second erased a 1-0 San Diego lead and wound up being the deciding hit.

But Doval struck out pinch-hitter Matt Beaty on an off-speed pitch to close out his first save.

Scoreboard: Box scores and summaries for the rest of Wednesday’s action.