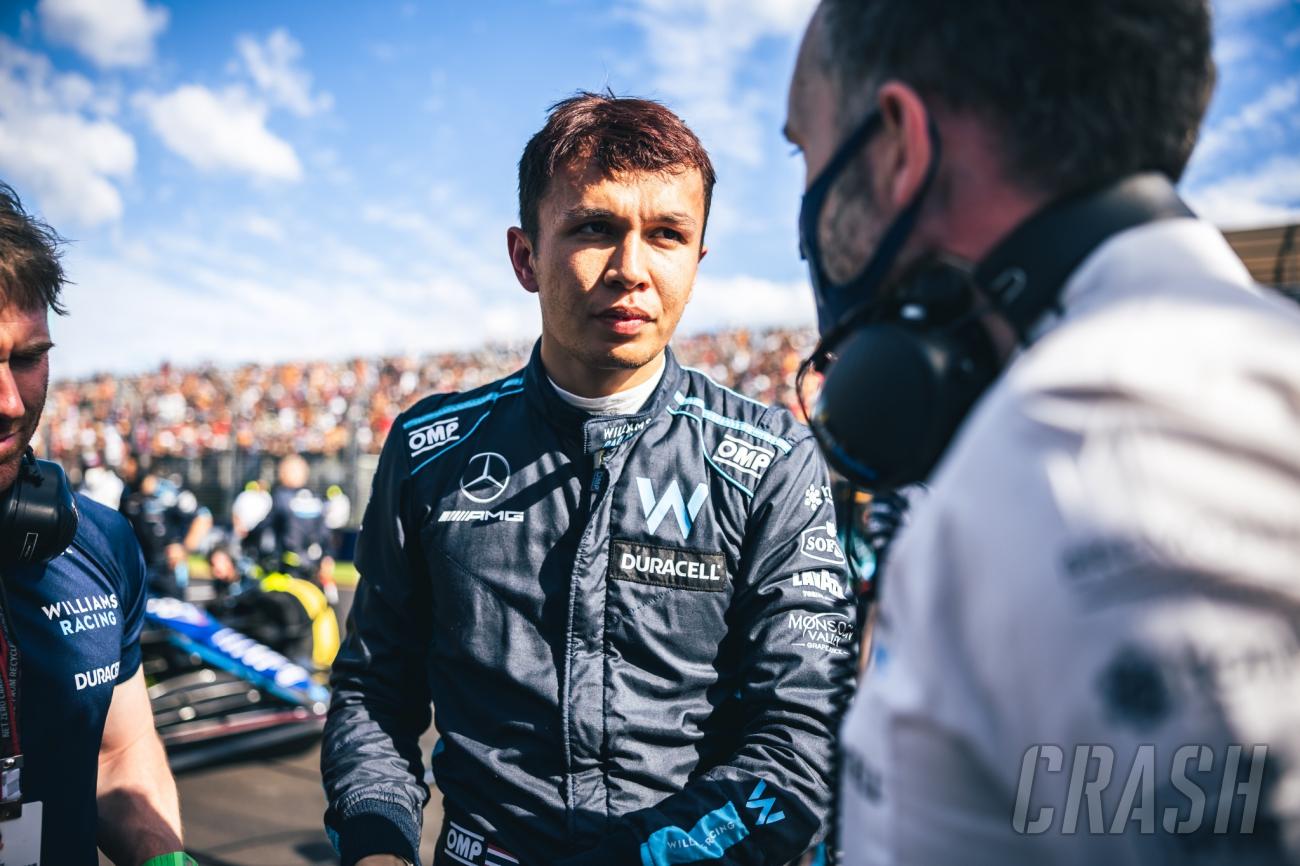 The Thai driver was forced to start from the back of the grid in Melbourne after he was disqualified from qualifying for a fuel sample infringement.

Like Kevin Magnussen and Fernando Alonso, Albon stayed out under the Safety Car on the hard tyres he started the grand prix on, allowing him to run inside the top 10.

Albon ran comfortably in seventh ahead of Alpine’s Esteban Ocon before pitting on the penultimate lap for softs.

Surprisingly, his pace was that strong it allowed him to rejoin the race in 10th, just ahead of Alfa Romeo’s Guanyu Zhou.

Going into Sunday’s grand prix, Albon revealed that the predicted finishing position in the pre-race meeting was 19th.

“It was good – it was a hard one,” Albon said. “We fought hard and it was like qualifying for 30 laps for us. I don’t know what it is about that tyre but that hard tyre suits us every time we put it on.

“Of course, P10 seems unimaginable to us and when you come into your race strategy meeting [the expectation is] P19 and P20 and we had a big chunk to P18 – but it worked. And we had a slow stop, I think the front-left [tyre] was a little slow, but it almost suited us because I almost came up right beside Zhou [Guanyu] and he couldn’t switch back or get a run into Turn 3. So that was the plan…”

The key to Albon’s strategy was his impressive race pace on the hards when running ahead of Ocon, and Lance Stroll, who was holding up the train consisting of Pierre Gasly and Valtteri Bottas.

“It was one of them things when everyone around us had 20 lap fresher tyres most of the time and I was thinking to myself that I had a Haas in front of me and I was like I’m just staying with him and that’s stopping everyone from overtaking me and once he boxed I was like okay the train is going to pass me now but we had great pace and we were pulling away, it was a bit surreal to do that, so yeah very special,” Albon added.

Another torrid weekend for Latifi

Latifi has struggled to match new teammate Albon so far this season and found himself running at the back for much of Sunday’s race.

Reflecting on his weekend, he said: “Yeah, definitely a tricky one. We were expecting after the FP2 high fuel run that we did, we just seemed to be struggling with the tyres quite a lot, kind of graining on both compounds and struggling to keep them in the right window. Obviously, there is a lot going on with the multiple safety cars and VSC’s and what not.

“So, what was going ahead between us I wasn’t so aware. It was great to see Alex finish in P10 in the end which I also kind of saw at the end, looking at the TV after the chequered flag and saw he was there.

“So super happy for the team because it has been a real difficult start to the season but on my side, there is purely still quite a bit to find, were just struggling with the balance and the pace.”

While Latifi is struggling for form, he remains encouraged by Albon’s performance and remains confident of getting on level terms with his teammate in the coming rounds.

“I think if he is able to extract that performance out of it there is no reason why me in the other car shouldn’t be able to, so definitely brings confidence and yeah for sure going to have a nice time looking through the data trying to understand how he was able to make it work,” he added.