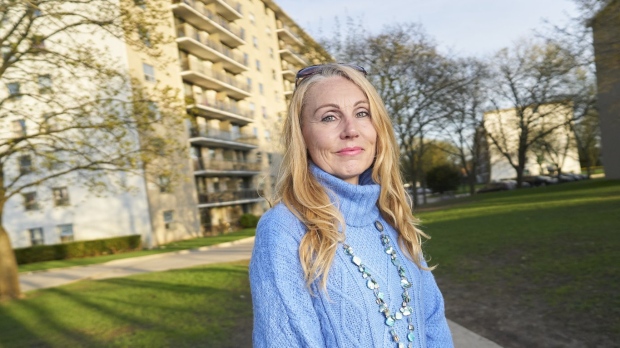 Shazelle Santana desperately wants to move from her one-bedroom apartment into a larger unit but has been unable to afford more space.

The London, Ont., resident says her seven-year-old son is growing fast and the family needs more room, but the surging cost of rent in the city has made it incredibly difficult to move.

“It’s gotten into a ridiculous situation,” says the 52-year-old photographer and artist.

“Really, I do need a two-bedroom. In normal times, years and years ago the way it used to be, I would even choose to have a three-bedroom and … I would have the extra room as a studio.”

Santana moved into her building six years ago and pays just under $800 in rent a month. A renovated one-bedroom apartment in her north London building is now being rented for nearly $2,000 monthly, she says.

Soaring real estate prices have also forced her to give up on plans to eventually buy her own home.

“I felt like that was quite feasible, had my goals and plans worked out,” she says. “And then in the past few years, I’m sitting here thinking it doesn’t matter what I do, I feel like it’s gonna be impossible now because of the prices.”

The cost of housing, both renting and buying property, is one of the top issues facing residents in this southwestern Ontario city as the provincial election approaches.

The main political parties are all making promises on housing affordability, with the Progressive Conservatives, the New Democrats and the Liberals all promising to build 1.5 million new homes if elected.

The Tory government passed a new law shortly before the election campaign to speed up approvals and other building processes, but critics said it lacked bolder measures such as changing municipal zoning rules to allow more housing to be built aside from single-family homes.

The New Democrats are promising to build 250,000 affordable rental homes operated by public, non-profit and co-op housing providers. They also pledge to bring back rent control and allow first-time buyers with household incomes under $200,000 to access home equity loans of up to 10 per cent of the purchase price.

The Liberals are promising to work with municipalities to expand zoning options, bring back rent control and establish the Ontario Home Building Corporation to finance and build affordable homes.

The Greens say they would build 182,000 permanently affordable community housing rental homes over the next decade, including 60,000 supportive homes.

For Kathleen Brunner, finding affordable housing in London has become a real issue.

She says she’s been trying to find a two-bedroom apartment to rent after securing a new job in the city, but five recent trips dedicated to the search for a new home have been unsuccessful.

The 53-year-old woman, who currently lives with her partner in a rented house in Barrie, Ont., says she is now considering moving into a motel or going to live with her 26-year-old daughter so she doesn’t lose her new job as a custodians’ supervisor at a London hospital.

“I have a job waiting, a good-paying job waiting … And I don’t have a place to move to,” she says.

Brunner says landlords and their agents have been telling her the rent has gone up recently due to high demand from people moving to the city.

She says she hopes to be able to save enough money to buy a mobile home one day, before she retires, because buying a property is not a feasible option anymore.

Michael Haan, an associate professor of sociology at Western University, says housing in London was relatively undervalued compared to other jurisdictions because the economy in the city relied on manufacturing that was not doing well until recently.

That situation has changed, he says.

“People are coming to London with Toronto money, and Montreal money, and we’re also starting to increase the number of newcomers that we receive,” he says.

Haan says the population increased in London by more than 10 per cent between 2016 and 2021, whereas the housing stock only went up 6.8 per cent.

“This is creating a bit of a perfect storm,” he says.

Jared Zaifman, the chief executive officer at London Home Builders’ Association, says supply in the city’s housing market can’t keep up with the increase in the population.

“Over the last five years … the population growth outpaces the housing supply every year by almost double,” he says. “We’re kind of reaching a fever point now where there’s so much of that demand and that missing supply.”

He says there are multiple issues hampering developers’ ability to increase the supply of new homes, including backlogs and delays in the development-approval, zoning and subdivision processes.

“This is an area where we know that the province has the ability and a strong capacity to potentially make some legislative changes … to streamline some of these processes that can take very, very significant amounts of time,” he says.

Supply-chain issues during the COVID-19 pandemic have also had an impact on homebuilders’ capacity to deliver new homes, he says, while the war in Ukraine is also affecting the arrival of some building materials from Europe.

The industry is also concerned about the lack of skilled workers, Zaifman says.

“We experience this every day as an industry, trying to find enough of skilled trades to be able to be on sites. Sometimes you’re waiting for weeks to get the appropriate crew over,” he says.

“Many retirements are going to be coming over the next number of years. So while we certainly have challenges now, I think there also needs to be a lot of recognition of how we can quickly plan and transition for that future.”

Ontario’s election is set for June 2.

This report by The Canadian Press was last updated May 29, 2022.