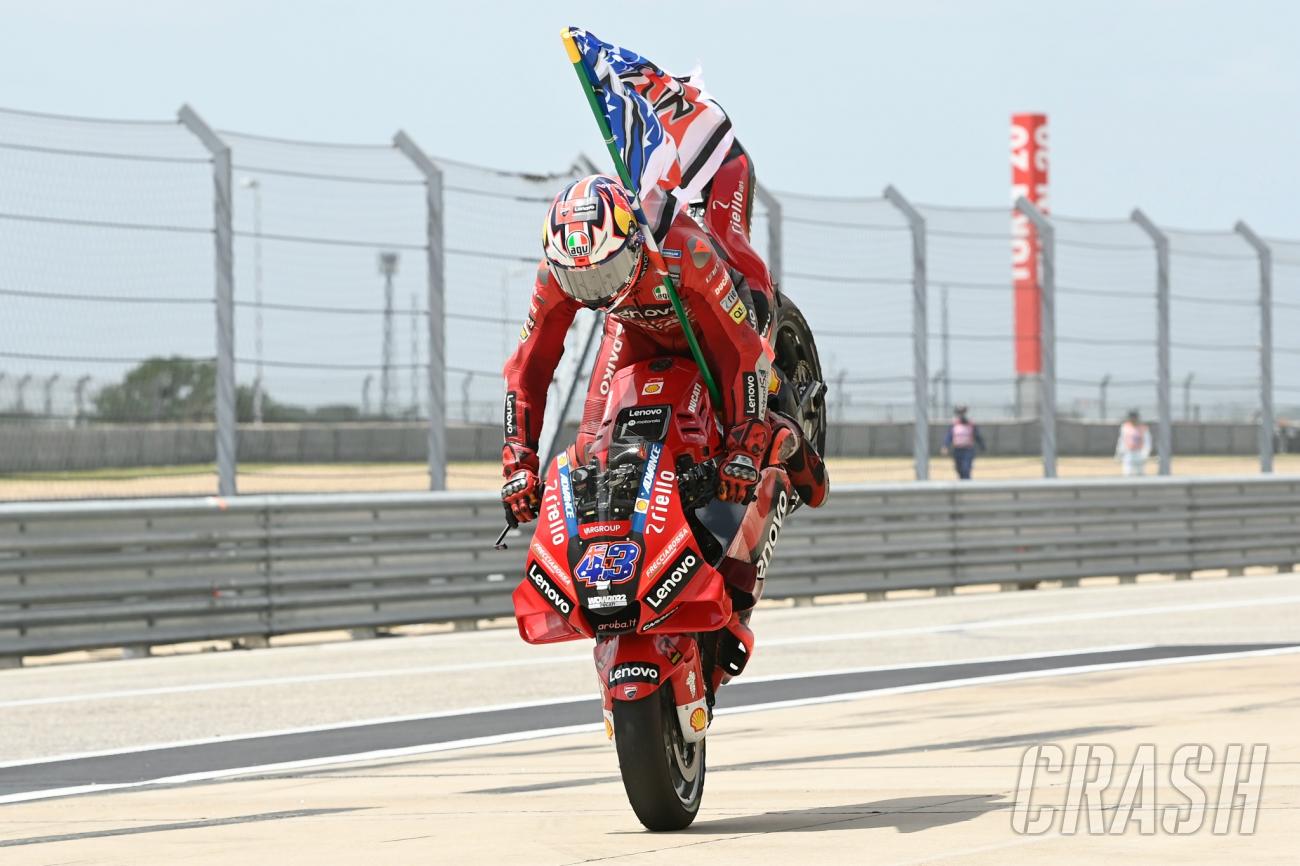 But having led for 15 of the 20 race laps, Miller admitted it was a slightly bittersweet feeling to be passed by Enea Bastianini and then Alex Rins in the closing stages.

“I’m really happy with this result, although I’m a bit disappointed having tasted victory for so long,” said Miller, who proudly carried a Nicky Hayden flag on the slowdown lap. “The team and I needed this third place, so I’m happy.

“I tried my best to break away, but made a couple of slight mistakes. Enea was back on me and blitzed me down the back straight. I thought, ‘all right, be calm. Sit behind and see what I can do towards the end of the race’.

“The next lap we came to Turn 11, he went deep and I followed him in and nearly ended up in the car park! Then I heard that Suzuki right next to me and it was like déjà vu from last year [with Joan Mir]. It was Alex this time. A nice, clean battle there through to the end.

“Honestly, I don’t know if I could have done any better today. My goal was just to try and get out front, keep my head down and put the laps together. I’m really happy to show that we’ve got the pace, at least for 16 laps. We’ll hopefully find the last four laps over the next week and bring that to Portugal.”

‘Bastianini doesn’t use the rear of the bike to turn’

With Bastianini now winning two of the opening four races to lead the world championship on last year’s GP21, questions are inevitably being asked about whether the GP22 is lagging behind its predecessor in areas such as tyre management.

Although Miller faded slightly towards the end, it was nothing compared to the drop suffered by team-mate Francesco Bagnaia (fifth) and especially Pramac riders Jorge Martin and Johann Zarco, who finished eighth and ninth.

“I knew the tyre consumption was a bit high for us. I tried to be conservative but I saw the others had more speed,” Bagnaia said. “The one who did a good job with the GP22 today was Jack, who was constantly fast from the start…. [But] Enea was unbeatable today. His pace was so strong.”

But Miller was quick to credit Bastianini, rather than the GP21, for making the difference so far this season.

“He’s able to ride it in a very smooth, consistent way and fast. That’s the tyre management. That’s all down to him. So, I’ll keep studying!”

The Australia added: “He’s riding well. When Enea comes past it looks effortless. He has a particular style where he sits very central and his head goes on the angle. He’s able to let the bike move underneath him and stay really firm, really calm on the bike and it works

“And of course, he’s a small bloke, so he’s very, very fast on the straight. That’s for certain. And he can stop it rather well, too. Pulling up an extra 10 kilos, there’s a little bit more [for me to stop].”

One area where Bastianini feels he isn’t as strong as the other Ducati riders is mid-corner.

“I’m really fast in entry of the corner, especially when there is a big braking, but I pay in the middle of the corner because I’m more slow,” he said. “I have to improve this because it’s too different for my style.

“Other riders have some different styles, but Jack is very close to mine. I compare many times the data with him. For me, the ’21 to the ’22 bike is still very similar. It’s very close I think. I’m not in an advantage.”

‘This championship is wide open’

Miller’s first podium of the year moves him up to seventh in the championship, as the top GP22 rider, but still some 31 points from Bastianini – not helped by the technical DNF in Qatar.

“It is what it is. We’re back up here. They’re saying a rough start to 2022, but the bike broke down in Qatar, I finished fourth in Mandalika, and then last weekend [in Argentina] was rough.

“We’re only four races in and we’re already on the podium, so that’s a positive.

“The real championship will start once we get back to Europe.”

While Bagnaia has already signed to stay at the official Ducati team next year, Miller faces potential competition from the likes of Bastianini and Jorge Martin over the second seat.

“I’m just here to ride my motorbike and do the best I can. That’s all,” Miller said of his future. “If I get a job next year with Ducati, it is what it is. I’d be more than happy to stick around. I love the group I’m with.

” I’m just focused on this year and trying to do the best job I can do.”

The triple premier-class race winner didn’t rule out the idea of retuning to Pramac, which also runs factory-spec machinery.

“I wouldn’t care. As you can tell, the bikes are all good. They’re fantastic. I know for a fact that they’re [Pramac] on the same equipment,” Miller said.

“It doesn’t bother me. As long as I’m getting the opportunity to fight for podiums and be here with all the fans, living my dream, that’s the main part.”