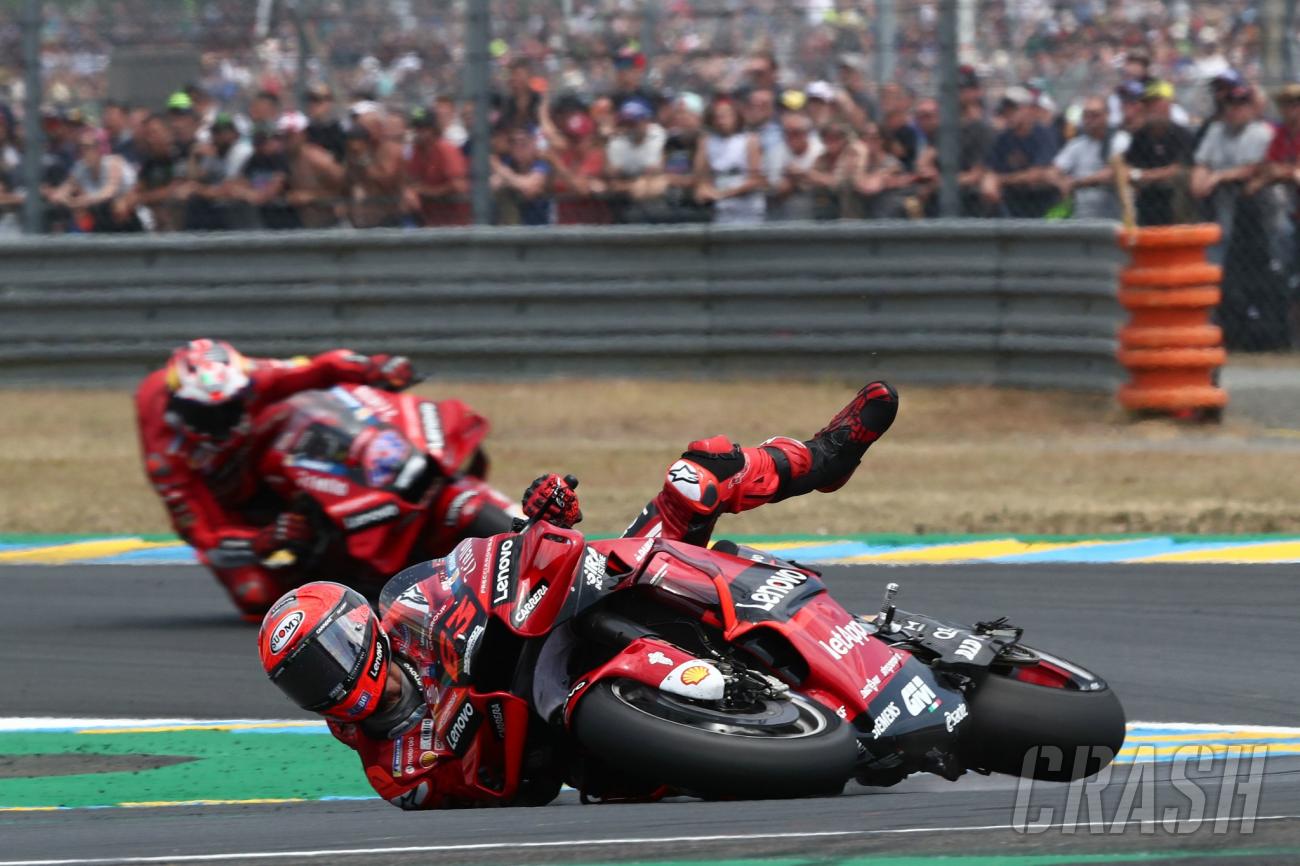 For the third time this season, Enea Bastianini’s incredible late race pace proved too hot to handle for his rivals. The Gresini Ducati rider made a brilliant start as he slotted into second behind Jack Miller, and although a small mistake saw him lose two places, Bastianini proved that overtaking despite tyre pressures going through the roof is possible. Bastianini made his first move for the lead with six laps to go, but long-time leader Francesco Bagnaia responded immediately to regain 1st place at turn six. However, back-to-back mistakes from the factory rider gifted Bastianini a clear passage to victory later in the lap.

One of his best rides of the year, if not the best, Miller was ultra consistent as he never fell outside of the podium places. The Australian was unable to go with Bagnaia and Bastianini shortly after mid-race distance, however, it remained a strong performance from the three-time MotoGP race winner, and one that could be big in his efforts to keep hold of his factory ride.

2022 just keeps getting better and better for Aleix Espargaro as the Aprilia rider claimed his third consecutive MotoGP podium, which is also his fourth in the last six races – includes his maiden win in Argentina. Espargaro was slightly fortunate as Bagnaia and both Suzuki’s crashed whilst ahead, but Espargaro delivered a great performance nonetheless to gain ground in the championship on Fabio Quartararo, after he held off the Frenchman during the final five laps.

As is becoming all-too familiar for Quartararo, the Yamaha rider’s race was conditioned by failing to get ahead of the Ducati’s early on. With a good start crucial to winning his home race, Quartararo instead lost four places and had to recover from a tough battle with the Honda’s of Takaaki Nakagami and Marc Marquez. Although it wasn’t the race Quartararo would have hoped for, the 22 year-old did well to keep his composure and make his way back up to fourth, especially as other title contenders did not.

Like Quartararo, Johann Zarco got a poor start which dropped him outside of the top ten, this comes after receiving a three-place grid penalty due to impeding Pol Espargaro in qualifying. But after early contact with KTM’s Brad Binder, Zarco carved his way back up to sixth, before an overtake on Marquez saw him claim fifth.

What appeared to be another weekend where race pace was severely lacking, Marc Marquez was again the top Honda after pulling his RC213V around Le Mans in fine style. Marquez was unable to keep pace with Quartararo once the Yamaha rider got through, however, the eight-time champion showed impressive consistency with a bike that is clearly a long way away from being able to challenge for wins.

Back-to-back seventh place finishes have shown that Takaaki Nakagami still has a lot to give in MotoGP. The Japanese rider was extremely aggressive during the opening lap as he put moves on Quartararo and Marquez, but a mistake running into turn two meant he had to give up those places and more. Still, Nakagami responded in good fashion to take a solid top ten.

Despite KTM being absolutely nowhere for pace, and arguably having the worst bike on the grid at the moment, Brad Binder produced another stunning Sunday performance as he moved up ten spots in the race. Binder got the better of his team-mate Miguel Oliveira (before he crashed) and the likes of P. Espargaro, Luca Marini and Maverick Vinales.

His best result of the season, Luca Marini’s ninth place finish was also the Italian’s first top ten of the year. The Mooney VR46 rider was another who gained from plenty of crashes ahead of him, but it remained a good ride from the former Moto2 runner-up (2020).

With his team-mate once again on the podium, Maverick Vinales’ tenth place finish is a sign that the Spaniard is really struggling, despite pace being shown on occasion. The former Yamaha rider was nearly 20 seconds down on Espargaro.

After flashing pace on Friday – finished fastest in FP1 – Espargaro never found the same type of performance and therefore had a very lackluster French GP. Espargaro was impacted by Oliveira crashing in front of him – lost a couple of seconds due to the incident, however, Espargaro was struggling to get inside the top ten before that. Espargaro is going to need a lot more in terms of performance and results if he wants to remain at Repsol Honda in 2023.

Another solid points finish for Marco Bezzecchi who is beginning to pull clear in the race for rookie of the year.

In what’s been by far his most consistent weekend in the premier class. Fabio Di Giannantonio gets a grade of 7 after scoring his first points in MotoGP.

One of the riders who profited most by the carnage in front of him, Franco Morbidelli was running towards the back for much of the Le Mans MotoGP, as questions over his future must be asked. The Italian was 25 seconds down on team-mate Quartararo in what was another shocker for the 2020 runner-up.

Despite seven riders failing to finish, six of which were ahead of him at the time of their fall, Andrea Dovizioso was unable to score points, again!

A long way off the pace, rookie Darryn Binder finished 21 seconds behind Dovizioso and last of the complete runners.

The race leader and in control for so much of the French MotoGP, a serious title charge looked to be continuing for Bagnaia after his win in Jerez. As he pulled clear along with Bastianini from the group behind, a top two finish appeared certain before he was forced into an unforced error as Bastianini broke Bagnaia. A hugely disappointing day for Bagnaia as he sees Quartararo and Espargaro claim valuable points.

A bad start to his MotoGP career got even worse for Raul Fernandez as the already injured Spaniard crashed out at turn six.

In the midst of a strong fightback, Oliveira crashed out of tenth place while trying to chase down team-mate Binder. The Portuguese rider, who could be set to leave KTM at the end of 2022, is really struggling for form at the moment.

Like his team-mate Fernandez, Remy Gardner brought another disappointing round to an end with a race crash.

Battling against the likes of Miller, Espargaro and Quartararo for a podium, Joan Mir made an uncharacteristic mistake as he crashed out from fourth. After seemingly finding the pace too hot at the front, Mir started to close back in on Miller, but in a race where he could ill-afford a non score, that’s exactly what happened after losing the front at turn 14.

Making it a disastrous day for Suzuki and also his title hopes, Alex Rins was the first Suzuki rider to crash after running through the gravel at turn one. Like Zarco and Bezzecchi who had similar moments in free practice, Rins attempted to re-join the track at very high speed, however, Rins lost immediate control before landing heavily on his head.

A season that promised so much after his stunning rookie campaign, not to mention Jorge Martin secured pole at the season-opener in Qatar, the Pramac rider instead appears lost for confidence as he crashed out of a race for the fifth time this season – one of those wasn’t his mistake. It’s now unlikely that the Spaniard will get promoted to the factory team, but if he does, then questions will be asked.