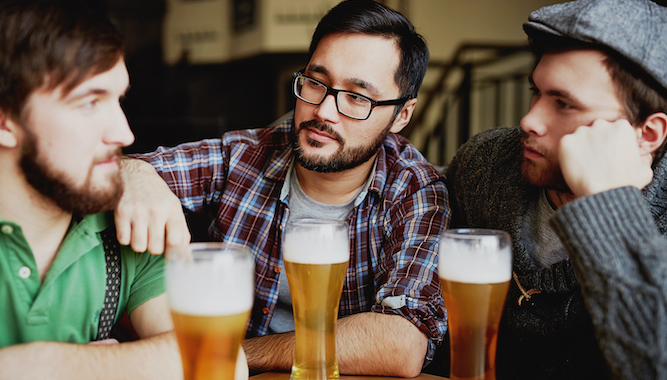 BREXIT divided the nation, but now it is time to put aside our differences and work together. And stop saying things like ‘You’re a dick, Roy’. Because there’s not much I can say to that.

Unfortunately for me, with Dover in chaos again and the economy not recovering from Covid, Brexit is looking like a very stupid idea. So I say: let’s forget our differences and unite as a nation. And a united nation doesn’t say ‘Tell us about the benefits of Brexit, Roy’ in a nasty sarcastic tone of voice.

Yes, I called people ‘snowflakes’. Yes I frequently referred to ‘pants-wetting remoaners’. Yes, I wouldn’t stop saying ‘We won, suck it up’. But now I believe we should all be friends again. I was only kidding when I called you ‘traitors’, right? That was obviously a joke.

It breaks my heart to see families and workplaces torn apart by this thing I angrily voted for and would not f**king shut up about for five years. If Jesus and Nelson Mandela were willing to forgive, it should be easy for Remain voters to stop calling me a pillock.

Remainers should also stop making prejudiced comments like ‘Roy, mate, will you concede you were wrong about Brexit?’. It’s a form of racism against Leavers and could easily be taken as a threat. I’d get the police involved, but they’re probably all on a Muslim transgender diversity course.

I come as a peacemaker. We have so much in common as a nation. We love a cup of tea. We all want England to win the World Cup. We all hate foreigners like those puffed-up German Nazis, cowardly French garlic-munchers and greasy bum boys like the Greeks. Oh. You don’t. Forget I said that.

I’d like us all to admit we were wrong. I was wrong about every single detail of Brexit and voted out of spite and ignorance, and you Remainers were wrong to vote for au pairs and skiing holidays, which you all have.

But most of all I’d like it if I wasn’t called a ‘daft bastard’, ‘ignorant xenophobe’ and ‘f**king halfwitted racist gammon shithead’ on a daily basis. So if my wife is reading this, can you stop saying those things, Yvonne, love?