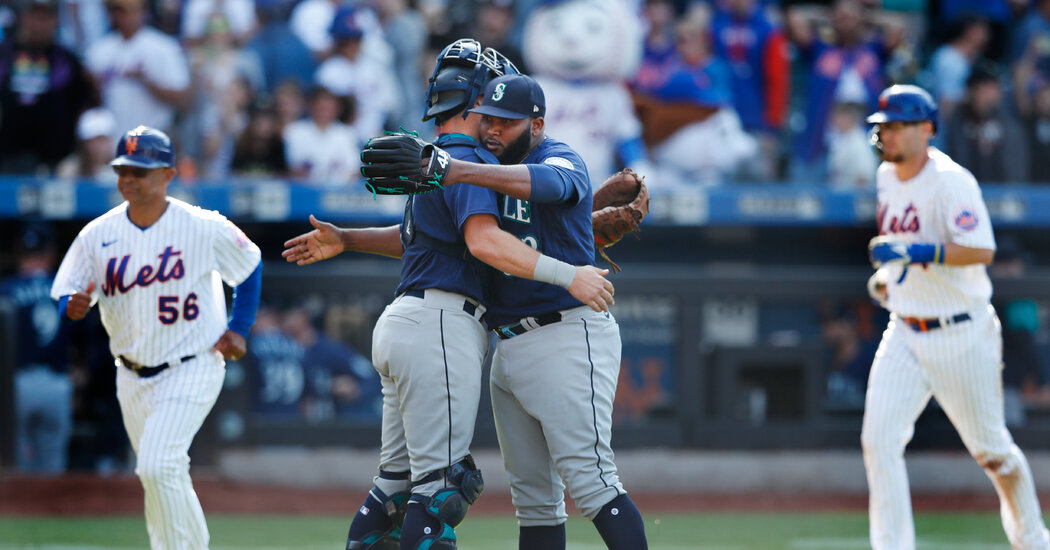 The Mets had not lost a series all season, but that streak sailed when the Seattle Mariners closed out a teeter-totter affair Sunday.

Seattle outslugged New York in the rubber match of a three-game set at Citi Field, winning, 8-7. The Mets had multiple chances to keep their streak alive, as a mammoth home run from Francisco Lindor gave New York a 1-0 edge in the first inning. J.D. Davis and Brandon Nimmo each plated two with triples in the fourth, and a near ninth-inning comeback had the Queens crowd in a frenzy. But Pete Alonso went a smidgen too far on a two-out, two-strike checked-swing attempt against the Mariners’ right-handed reliever Diego Castillo, and the game ended with the bases loaded.

“Sometimes, even though it stinks, you just have to tip your cap,” Alonso said after the game. “He executed extremely well, and he beat me. Simple as that.”

Seattle, meanwhile, got the best of the right-hander Carlos Carrasco, who struggled to control his slider. He lasted four and one-third innings and allowed eight hits, four earned runs and one walk. He struck out two.

“Relax, all right? Don’t try to strike everybody out. Strikeouts are boring! Besides that, they’re fascist. Throw some ground balls, it’s more democratic.”

While Carrasco ultimately departed with a 5-4 lead, the Mariners’ Mike Ford tagged him for a two-run single in the fourth. Julio Rodríguez, a rookie sensation, then hit a game-tying solo shot off the left-hander Chasen Shreve (1-1) in the sixth inning. Seattle catcher Cal Raleigh proceeded to take the right-hander Drew Smith deep, crushing a two-run, 435-foot shot to right field to make it 7-5. The Mariners tacked on their final, decisive run in the seventh when Jesse Winker, a longtime nuisance to the Mets and their fans, doubled. Rodríguez singled him home.

“That’s a good team over there. I’m surprised by their record because they fought us really, really well this weekend,” Nimmo said of the 16-19 Mariners. “They hit really well.”

Seattle also won the series opener Friday, 2-1. The Mariners starter Marco Gonzales and the Mets ace Max Scherzer each limited the opposition. Saturday’s game was more of a preview of the offense to come in the finale, as catcher Patrick Mazeika, called up Friday to replace the injured James McCann, helped the Mets to a 5-4 win by belting a go-ahead solo homer in the bottom of the seventh. That came after Winker hit a game-tying, three-run homer in the top of the seventh — and agitated Mets fans by waving to the crowd as he crossed the plate after a slow trot around the bases.

“I don’t really give it much thought one way or another,” Mets Manager Buck Showalter said of Winker’s wave. “Just trying to get him out. A long time ago, I learned when things happen on the field, I kind of look down in the dugout and see if it’s important to our guys. If it’s important to them, it’s important to me. I’m not going to go, ‘Hey you should be upset at that’ or something.”

The Mets, who had previously done no worse than splitting a four-game series with Atlanta from May 2 to 4, are now 23-13. They remain comfortably in first place in the National League East after their first series loss of the season. They went their first 10 series without coming up short.

The record for consecutive series to open a season without losing one is 21, set by the 1946 Boston Red Sox, per MLB.com’s Sarah Langs, via Elias Sports. While the Mets were far from sniffing that total, they certainly took pleasure in their streak.

“We’ve been playing extremely good baseball,” Alonso said. “That’s something really to be proud of. We’ve had an amazing start. We’ve got to do whatever we can to keep playing well. It’s been a very fun season so far. We got to get back on the horse tomorrow.”

Joking, Nimmo said: “It’s unfortunate to lose the first series of the year, but it was probably going to happen at some point. Got it out of the way and now we can move forward. You get used to winning. You come in, you turn the music on, you dance. That’s just what you do when you win more games than you lose. You definitely can take it for granted.”

Showalter found joy in the streak as well. Like his players, however, he highlighted his team’s need to move on. He knows that any season, even a successful one, is filled with streaks, good and bad.

He doesn’t want the Mets to lose sight of that as they prepare for a new series.

“Even I can do the math of what that would mean,” Showalter, referring to the standings, said when asked if he took pride in the streak. “But we’re getting ready to play the St. Louis Cardinals for four games. Winning three games is hard. So I think it really puts it in perspective, how hard it is.”

New York’s series against the Cardinals, which starts Monday in Queens, will be one to keep an eye on. The two teams took exception to a few hit batsmen and high-and-tight offerings when they squared off in St. Louis from April 25 to 27. Benches cleared in the final game of that series when Cardinals third baseman Nolan Arenado became enraged at an up-and-in pitch from reliever Yoan López.

Alonso was among those hit in the series, taking one to the helmet, and the Mets, the major league leaders in hit batsmen, had previously expressed concern over the rate at which they were getting plunked.

“I’ll let them handle their players,” Showalter said at the time when asked about Arenado’s reaction. “I know our player got hit in the head and went to first base.”