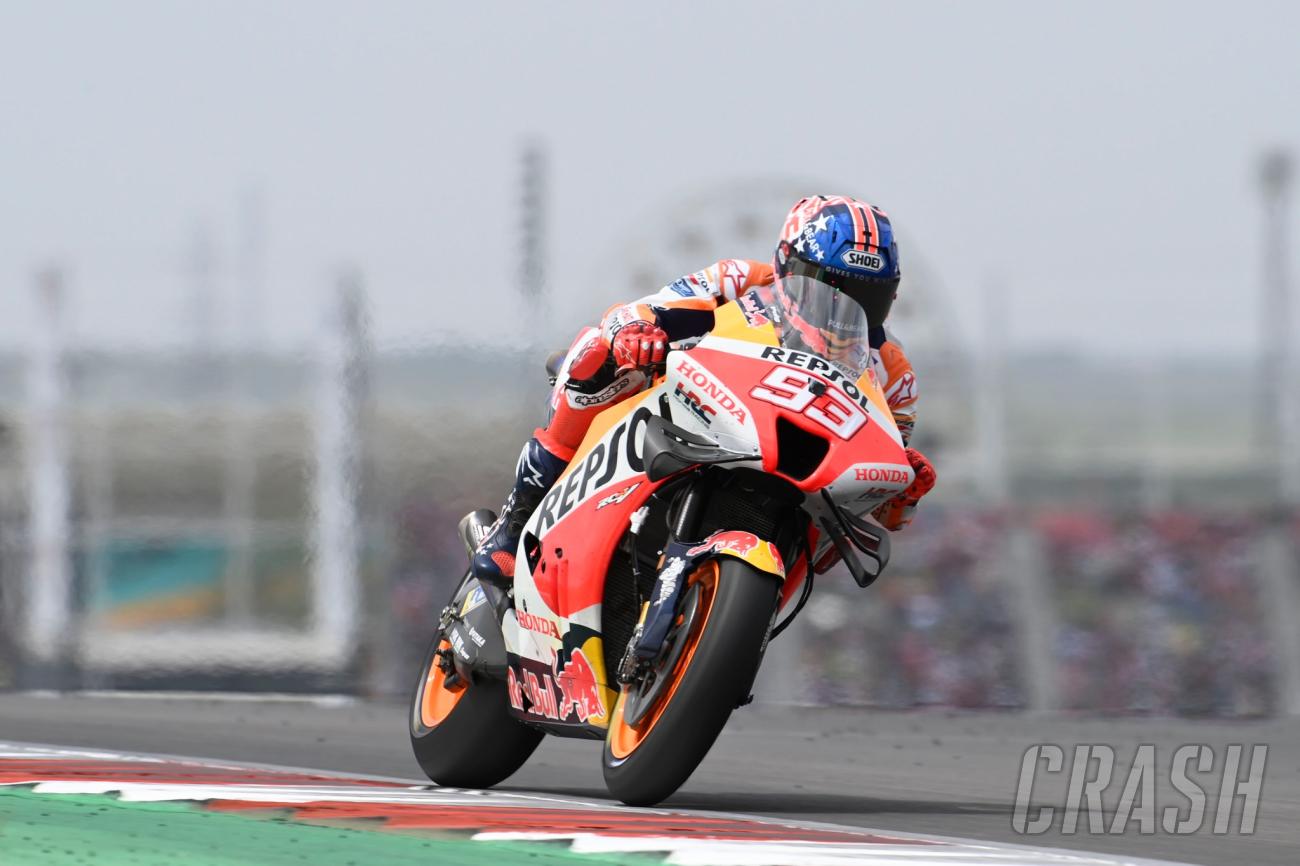 A pre-race favourite, not only because of his outstanding MotoGP record at COTA – seven wins from eight races – but his overall pace throughout the weekend, Marquez lost all chance of victory in less than five seconds.

Marquez failed to get off the line with any conviction following a technical issue with his RC213V.

But despite that, Marquez produced a fightback not too dissimilar to Jerez 2020, however, this time the Spaniard remained aboard his Repsol machine.

Describing his bike as ‘crazy’ after seeing an alarm on the start, Marquez made over ten overtakes in just three laps, before eventually finishing sixth.

“Marc has done a really impressive race, speaking honestly,” added Puig. “He had a technical problem at the start which was a shame. Honda HRC are investigating what happened, what the problem was and what the solution is.

“Even with this situation, Marc was able to overcome it and after Turn 1 his bike was working well and he was able to show his real pace.

“From last after the issue, and very far back from the group after Turn 1, more than six seconds, he was able to show how he was the fastest rider in COTA on Sunday. Everyone saw it and he put on an incredible performance.”

“Marc couldn’t ride in Indonesia and then wasn’t in Argentina, so we are really happy that he was able to ride in Texas after his crash during Warm Up in Mandalika.”

Is Marquez still the best rider in MotoGP?

Whether you’re a fan or not of the eight-time world champion, Marquez provided most of the entertainment during Sunday’s race, a Grand Prix which highlighted just how capable the 29 year-old still is.

And although it wasn’t a win that he clearly had the pace to deliver, Marquez made a statement of intent in Austin.

Should Marquez stay fit, then the Spaniard should only get better and better with the Japanese manufacturer’s revolutionised 2022 bike.

While staying fit is a big ‘if’ Marquez looked much more like his former self, leading to Puig calling Marquez a ‘step above’ the rest.

“He was able to show his level, which is the same as it usually is. He is a rider who is a step above the others,” added the former Grand Prix rider.”

2022 has so far been another tough start for Honda across both its teams as Pol Espargaro and Marquez are well over a win behind new championship leader Enea Bastianini.

Nevertheless, Puig is confident results will begin to drastically improve: “Overall, we have had many problems at the start of this season, but Pol is 38 points behind Bastianini and Marc just 40. So we are thinking in a positive way, we will try to fight and recover this gap.

“Our spirit is to try to win and this is our goal. In Austin everyone could see how Marc was riding, you can realise a rider’s potential when a rider is last with many seconds to recover, almost six after lap one, and finishing only six seconds from the winner.

“‘A buen entendedor pocas palabras bastan’ as we say in Spanish – a word to the wise is enough.”

Not for the first time this season both LCR Honda riders produced very little throughout the weekend.

Takaaki Nakagami qualified tenth before finishing 14th, while Alex Marquez, who it must be said seems to be lacking in confidence, crashed out for the second time in four races.

Finding the right set-up seems to be a big issue for both riders, especially Nakagami who felt none of the changes made a significant difference during the Austin weekend.

“It was a tough race, but I made a really good start from the first lap and got in a good position, but unfortunately the lack of grip and the strong wind didn’t help with the front stability,” said Nakagami. “All weekend we tried many things to get the best balance from the bike, but unfortunately, we couldn’t find it, so it was a long and really tough race.

“I tried my best, but I didn’t have enough speed and the performance was not what we were looking for.

“So now we’re on to the European rounds starting in Portimao and we need to spend a few days analysing what’s happened in these four races.”

Although Marquez claimed to have regained a ‘good rhythm’ after warm-up, the former Moto2 champion crashed after just five laps, a mistake he took full accountability for post-race.

Marquez added: “We suffered a lot this weekend. On Sunday we didn’t even finish the race, we managed five and a half laps, but I’m quite happy. I recovered some confidence during the warm-up, I was quite constant and I was able enjoy a little bit.

“During the race, I made a good start, was able to overtake some guys and had a good rhythm, but I made a mistake, for which I want to apologise to the team for.

“Anyway, I want to try and keep this feeling for Portimao, we know we have to improve and score more points, but I’m motivated for Portugal and at least we have some things to take from this weekend.”