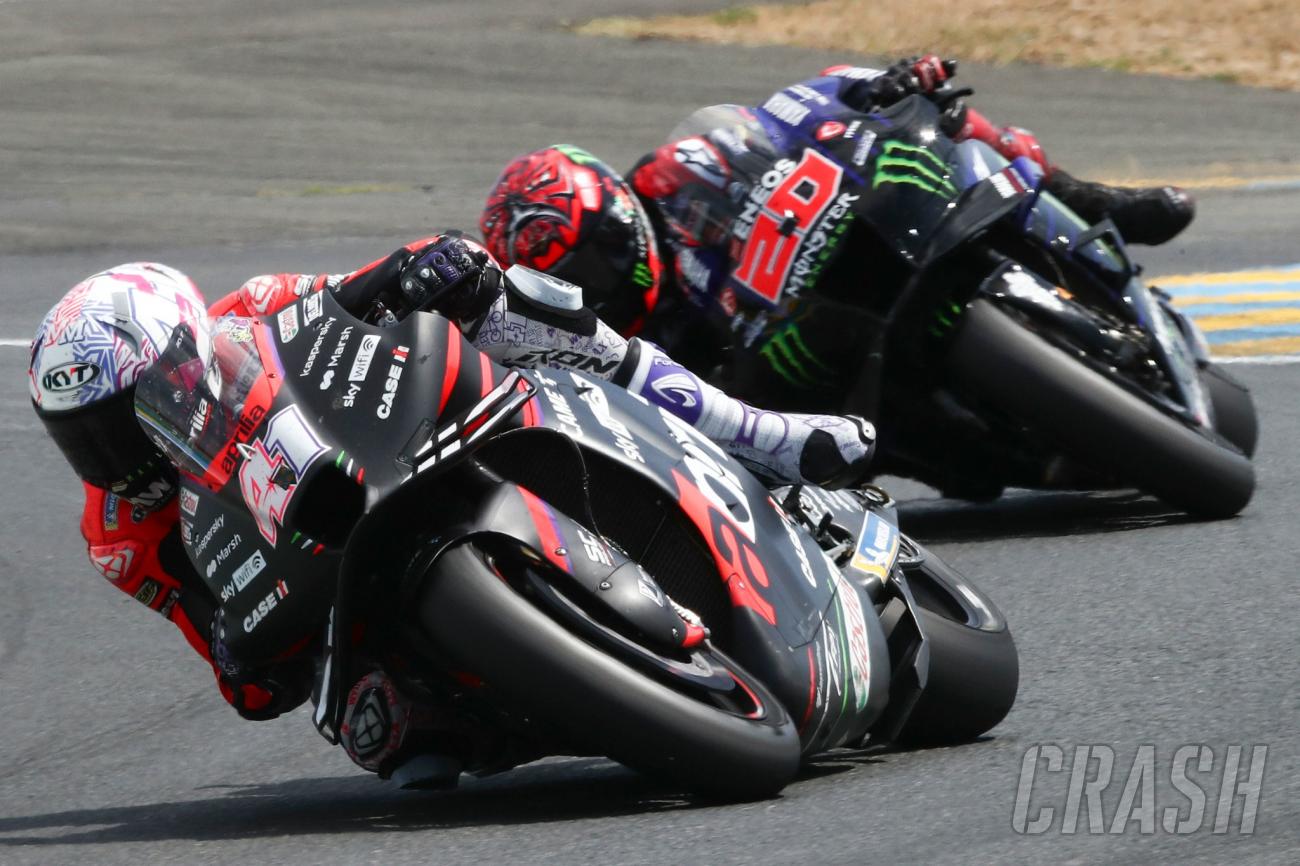 Since joining MotoGP with Yamaha, late braking has been one of Quartararo’s strongest areas, something no other M1 rider can get close to matching him with, particularly this year.

And while his mid-corner speed is just as impressive, Quartararo found the challenge of picking off Espargaro for a home podium at Le Mans impossible to achieve.

The Aprilia rider conceded that mid-corner performance against his main title rival is a slight weakness at present, but his own ability on the brakes cannot be questioned.

Speaking after the race, Espargaro said: “I knew that every time I got close to Jack [Miller] that I had the pressure issue with the tyre. I knew it was impossible to overtake and we were braking very similarly, but I knew that Fabio [Quartararo] had exactly the same problem behind me.

“It has been extremely difficult because I was fast, but not enough to overtake Jack [Miller] or even at the beginning of the race Joan Mir.”

A circuit that often causes chaos in terms of crashes, the MotoGP race at Le Mans was no different as seven riders crashed out.

In fact, the slippery surface made it easier to crash than to ride fast, said Espargaro: “I knew today was also about finishing because the track was very slippery. It was more difficult to stay on the bike than to go fast.

“It was not very difficult to go fast but avoiding a crash was very, very difficult. Every time I tried to get close to Jack I was having a lot of movements on the front. I saw on the dash that my front tyre was on fire so I let him go to around eight tenths in front and then I just stayed there.

“In the last part of the race I saw on the big screens that Fabio was very close. I saw one time that he was a little bit better in the mid corner, also in the weekend I was studying him on the video and he was better than the rest on mid-corner, gaining a lot of speed.

“I knew that if I went wide by two metres that he would pass me on the inside. It was very difficult not to make any mistake over the last ten laps.”

Espargaro’s third podium in succession, fourth on the season which includes a first-ever MotoGP win for himself and Aprilia [Argentina], is a result that seems him cut Quartararo’s championship lead to just four points.

Following years of project building with Aprilia, riding different machines that were either uncompetitive at that time or not yet developed to the standard they are now, 2022 has been a breakthrough season for the Spaniard who claims to finally have ‘the bike I dream of’.

“I have no words, sincerely. What’s happening… I don’t really understand,” said Espargaro.

“I’m enjoying this year and I have the bike that I dream of. I asked the engineers to make this bike that I always dreamed of and they did it.

“They improved the bike a lot in pre-season and it’s the bike I always dreamed of.”