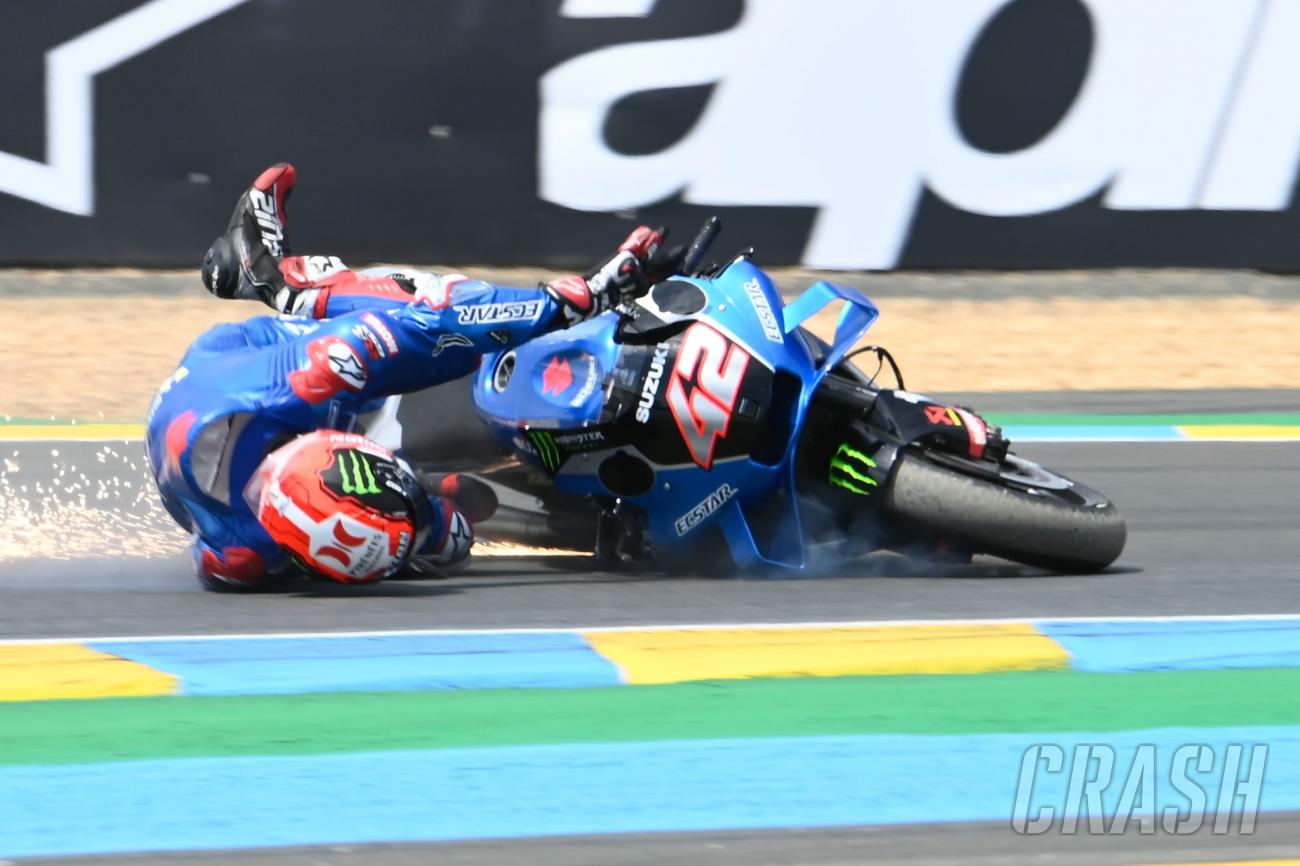 But Rins’ podium hopes ended in dramatic fashion when he speared off track at the fast first turn, having been caught out by turbulence behind Francesco Bagnaia’s Ducati.

Keeping control of his GSX-RR as it bounced through the gravel, Rins soon realised he was on course to cross paths with the leaders at the first chicane.

As his bike jumped over the kerbs, it kicked sideways, and spat the Spaniard onto the ground just ahead of Jack Miller.

“Luckily, I’m OK,” said Rins. “If you run off at that corner, like I did, it can be very easy to get hit by another rider – thankfully the guys avoided me and nothing bad happened.

“I had already recovered some positions and I felt strong, but when I was behind Pecco, I think I got a little bit more slipstream pulling me into the corner.

“When I was in the gravel, I was just trying to keep the bike upright, it’s difficult to manage at 200 kilometres per hour, while trying to look where the riders are.

“I tried to reduce the speed as much as possible and avoid a crash with Miller. “So But when I got out of the gravel and onto the tarmac, I exited at a slight angle and that caused me to crash.

“It’s really a shame because we did a really good weekend. We’ve been so competitive during all the sessions.”

A disastrous race for Suzuki was made complete when team-mate Joan Mir crashed out of fourth place, on lap 14 of 27.

Like his team-mate, Mir felt his braking had been compromised behind a Ducati, in his case Miller.

“I was recovering the gap to the top riders,” Mir said. “It’s true that behind the Ducatis, it’s always difficult to stop the bike, you have to manage the situation. I didn’t manage it in a good way.

“I made a mistake, a bit for a mix of things, one thing was this, another is that I tried to brake little bit too much too late, then I had to trail a bit more brake than normal, and when I released the brakes, I lost the front.”

The fall meant that Mir’s quest for a first rostrum of the season continues.

“I feel like we have the potential, the bike works, we are showing flashes of performance, but I cannot put it all together to make the results that we want,” he said.

Mir’s second DNF in three races, after being taken down by Miller in Portimao, means the 2020 world champion has now dropped to joint seventh in the standings, 46 points from Fabio Quartararo.

“I’m sure that once I get a podium, it’ll be easier, because of the confidence and a bit of everything, so we have to find that.

“The tracks that are now coming up are more enjoyable for my style. Sure, this one is not, I don’t enjoy this track so much. Never in my life have I been here to Le Mans with less than two crashes in a weekend. So this time was not an exception.”

After his second non-score in as many races, Rins remains fourth in the world championship (-33 points), having taken podiums in Argentina and Austin.