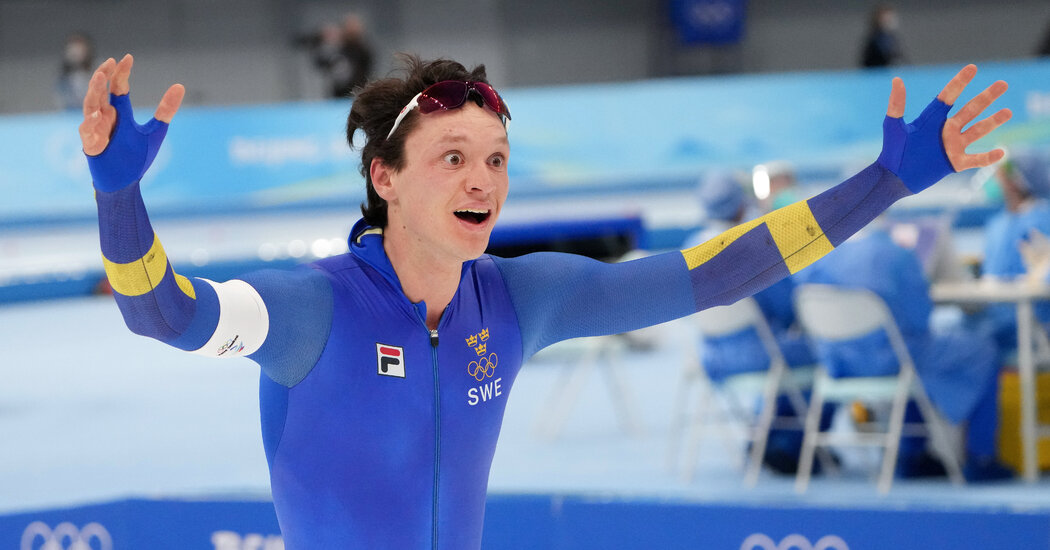 For 4,200 meters, it looked as if the National Speed Skating Oval would play host to one of the biggest upsets of the Olympics. But then, in a few strides, the potential upset reverted to the inevitable.

Nils van der Poel of Sweden won the men’s 5,000-meter race in an Olympic record time Sunday, continuing a superlative season in which he has won every distance race he has entered. His victory produced Sweden’s first speedskating Olympic medal since the 1988 Games.

Van der Poel has gotten used to winning World Cup races by two or even five seconds, an eternity in a sport routinely decided by hundredths of a second. But on Sunday, the Olympic gold medal seemed to be out of his reach for most of the race.

Skating about an hour before van der Poel, Patrick Roest of the Netherlands set the first Olympic record time of the night in the event. As pair after pair of skaters went, nobody — not even past Olympic champions like Jorrit Bergsma and Ted-Jan Bloemen — approached Roest’s time.

Even Van der Poel was trailing by 1.7 seconds heading into the final two laps of his race. Victory looked unlikely. Then, as the small audience of Chinese spectators roared to life, van der Poel unleashed two of his fastest laps of the race. Roest’s two final laps were his slowest

While many speedskaters are practically monastic about their training, van der Poel is one of the great characters of his sport. After finishing a disappointing 14th in the 5,000 meters four years ago in Pyeongchang, for example, van der Poel did not skate for two years. Instead he joined the army for a year, and then spent a year focused on ultrarunning.

His two years off gave him a new perspective, he said, and he decided to put everything into speedskating. “I believe that’s the heart of sports, for after all what are we,” he said last year. “Athletes are clowns and dancers. We’re entertainers and role models. That’s the only reasonable explanation I can find to do sports.”