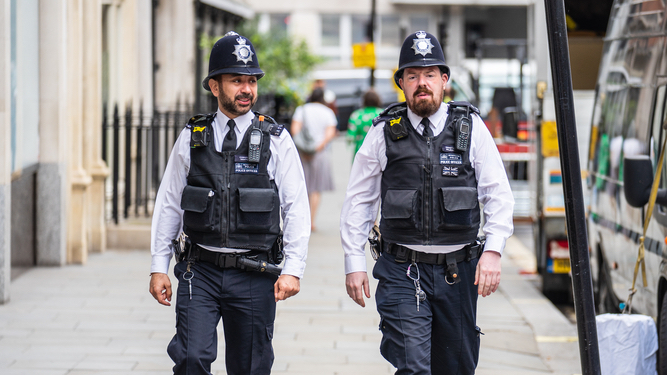 WITH the police overreacting to the most minor anti-royal protests, it’s probably wise to watch what you say, citizen. Here are some things to avoid to be on the safe side.

If you’re not a granny, the official pictures of the youngest royals will make you feel fairly nauseous. Saying so will cause the police to do you for treason, when really it’s the Mail’s fault for creepy headlines like: ‘WHO’S ALL GROWN-UP NOW? BIG BOY GEORGE WEARS LONG TROUSERS!’

In spirit, this is hypothetically cheating on Prince Andrew’s model girlfriend from the 80s. An overzealous copper could easily find cuckolding Andrew disrespectful to the Royal Family, and you’ll have ample time to fantasise about deleted scenes from Star Wars as you do 12 years in HMP Wakefield.

‘I wouldn’t want to be one of Charles’ lackeys’

King Charles’ recent tetchy behaviour suggests being one of his servants is a f**king mare. You’d live in fear of being sacked for not getting the toothpaste perfectly dead-centre on his electric toothbrush. You traitor. You should be honoured to serve. Hopefully someone has reported you on 999.

Morgan’s vendetta against a dippy Californian actress with a shite podcast smacks of ‘psycho ex-boyfriend the police would interview first’. Unfortunately he and the press have convinced millions of people she is evil. Meghan-sympathisers could be rounded up under the Riot Act. They might get a few cuts and bruises resisting arrest. Shame.

The Queen loved corgis, so three vanloads of riot police in space marine body armour could boot your door in at 4am. You’ll be charged with breach of the peace, because the cops have thus far shown no sign of caring how ridiculous the charges are.

Despite being his most famous hit, some music listeners find Purple Rain by Prince cheesy and overproduced in comparison to more mature tracks like Sign O’ The Times. It’s got bugger all to do with the Queen, but the fact that it’s by someone called Prince is probably enough for a particularly dense plod to give you a faceful of pepper spray.