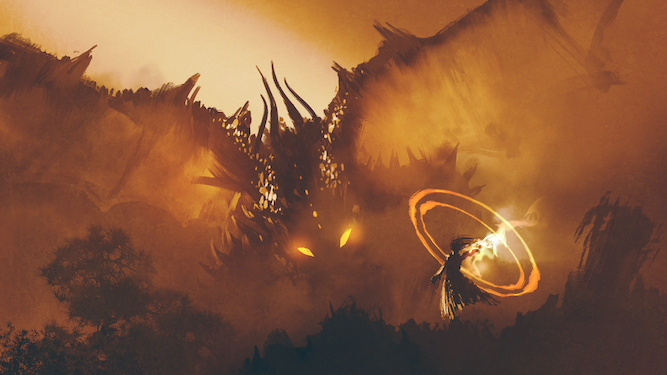 MADE the mistake of reading more than one fantasy trilogy? Then you’ll have realised they’re all the f**king same and these clichéd tropes crop up every time:

Someone’s the chosen one

You’ve put in years of hard work becoming the world’s most evil and powerful warlock. Then along comes some twat farm boy who’s never done a day’s slaughtering in his life, but is the chosen dick of prophesy. Oh, so he’s the secret son of the fallen king? Nepotism again.

Whether it’s a Ring of Immense Power or a book that holds the secrets to eternal life, there’s always something the villain’s after and must under no circumstances get his hands on. Trouble is, its location is a mystery, so everyone and his nan is trying to find it. But we all know it’ll be bloody Chosen Boy.

There’s a dark side and a light side

There are no shades of grey in the fantasy world, just baddies and goodies. Helpfully divided into the Obsidian Nightshaggers and the Heavenly Lightbringers, the protagonist will toy with the first before inevitably and boringly plumping for righteousness.

There’s something that’s a bit like what we know, but different

You can’t have a knight in a fantasy world, otherwise people might get confused and think this is real life. You’ve got to call them a ‘Naiyart’ or a ‘Knick’ or some bollocks to make it clear that you’ve not just lifted from every other fantasy book going, which you have.

Their names are a bit like what we have, but different

Likewise, you can’t just call a character ‘Jennifer’ or ‘Colin’, because that’s not fantasy enough. Who’d want to read about an epic quest undertaken by two dickheads who sound like they run a pop-up coffee stall? Change a few letters to Vennifaer and Kolan and you’re away.

You can’t say ‘bollocks’ in the High Land of Shifting Magick. You have to say ‘By Torak’s beard!’ or ‘rusting earthfires!’ or some shit like that, to fully transport the reader to an epic realm where one word is substituted for another.

No fantasy novel would be complete without its fair share of huge, monotonous battle sequences that you skim to get to the bit with the protagonist again. Millions of stupid orcs versus hundreds of thousands of nameless dwarves in the Battle of Chuffer’s Gap? F**k off. We all know it’s a sideshow while the chosen one gets the special item anyway.