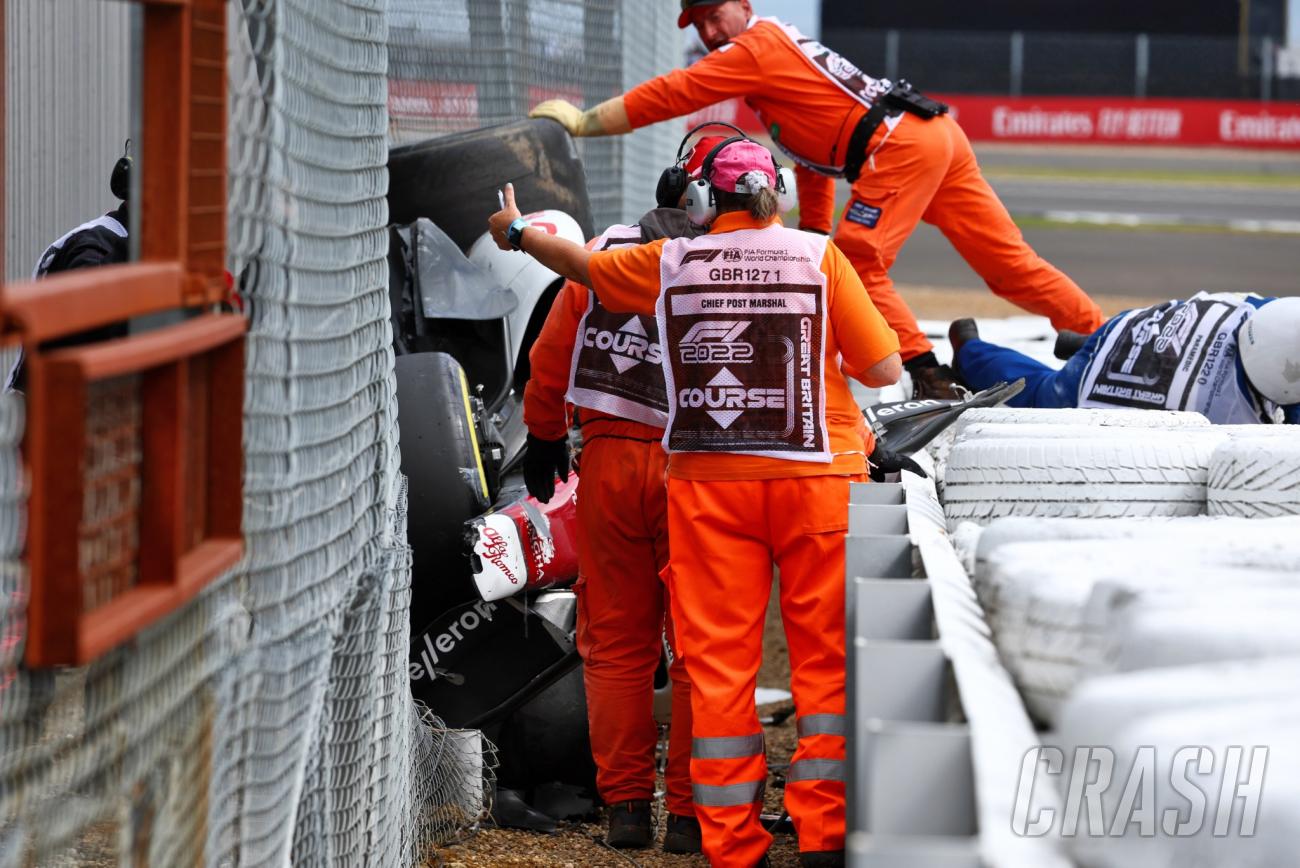 Zhou credited F1’s cockpit protection device for saving his life in the aftermath of his horrible first-lap accident that suspended the British Grand Prix for more than 40 minutes.

Contact between Pierre Gasly and George Russell as they diced for position on the run to Abbey pitched the Mercedes driver into the side of Zhou with dramatic consequences.

Zhou’s Alfa Romeo was flipped upside down at 160mph and skated along the run-off area and gravel, before being barrel-rolled over the barrier and into the catch fencing.

Miraculously, F1’s first Chinese driver escaped unharmed from the terrifying crash, in part thanks to the cockpit protection device that was introduced in 2018 despite opposition and criticism over aesthetics.

Halo – which is designed to sustain the weight of a London double-decker bus – also protected Roy Nissany in a collision with Dennis Hauger during an F2 support race earlier on Sunday.

Hauger’s car was launched over a sausage kerb at Vale and landed on top of Nissany. The Halo unquestionably played a role in helping to ensure that Nissany avoided serious and potentially life-threatening injuries.

A serious crash during this morning’s F2 race at Silverstone, as Dennis Hauger’s car was lifted up and ended up on top of Roy Nissany’s.

Both drivers have escaped unhurt after the crash due to the ‘life-saving’ halo. pic.twitter.com/aCcnfgQWXB

Is a tyre barrier rethink needed?

Having been caught up in the multi-car collision at the opening corner, Zhou’s car was launched over the tyre barriers before getting wedged in a tight gap between the catch fencing and the barrier.

Zhou was carefully extricated from the wreckage of his car by the medical crew, but the job was made more difficult due to the angle of the car. While the catch fencing ultimately did its job in protecting the marshals, photographers and fans in the grandstand, questions were raised about the positioning of the fence in relation to the tyre barrier.

Had Zhou been trapped due to being seriously injured, or if his car had caught fire, the situation would have been far more complex, concerning and time-sensitive.

Russell, who is a director within the Grand Prix Drivers’ Association (GPDA), was one of the first on the scene after he abandoned his crashed Mercedes to run over to the scene of the accident and check on Zhou.

“It was horrible, in that position, he was stuck there,” said Russell. “There’s nothing he could have done.

“We need to have I think to avoid the car being stuck in such a fine gap, in the space between the tyre barriers and the metal fence. He was just stuck in there with nowhere to go. Something to learn from.”

Another point of concern was the way the rollover bar on Zhou’s appeared to fail. This will likely form the focus of the FIA’s investigation into the horror accident.

The dramatic images and footage of the crash showed that the roll hoop did not survive the first roll and was seemingly ripped clean off. As a result, only the Halo was left to prevent Zhou’s head from hitting the ground.

The mandatory roll hoop is required to withstand loads of 60 kilonewtons laterally, 70 kN longitudinally and 105 kN vertically. This is a requirement all F1 teams must pass during the crash tests in order for their cars to be deemed safe to compete.

“Last time (as far as i remember) an F1 roll hub collapsing was with Pedro Diniz, Nurburgring ’99 (jumping over me),” Wurz wrote in a Tweet on Tuesday evening.

“This led to stricter crash tests, requested by GPDA, swiftly executed/implemented by @fia. Dear Mr President please check your inbox, we got (more) work to do.”

F1 avoided a worse outcome at Silverstone thanks to the tireless and never-ending approach towards safety standards, but Zhou’s accident also served as a reminder that improvements can always be made.